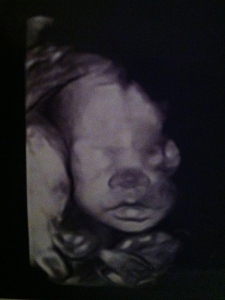 We had another routine ultrasound this week with our Perinatologist. There is nothing really “new” to report other than the fact that our baby girl is growing. In fact, she is not only gaining strength (as I can tell by the bumps, kicks, and punches she has been throwing lately 🙂 ), but size as well. The doctor estimated that she is approximately 5 lbs, 10 oz. at this point and expected to be about the same size as her big brother, Hezekiah, who weighed in at 9 lbs., 3 oz. at his birth (19″ long).

We rejoice in this as it seems as though our great God is further preparing our little one for the physical battle she will endure upon arrival. See, we have been told by the Pediatric Cardiologist that Tikvah will not be allowed to consume anything (i.e. breast milk or formula) until after she is stabilized, following her surgery (usually about 1 day or so). Since the surgery could take place anytime within the first 72 hours following her birth, she might not be able to have any food in her little system for the first 4 days of life.

Only then can they begin to introduce food to her system, but will likely have to do so through a tube until she gains enough strength and skill to suckle from a bottle. However, since she will be exercising a skill that she has never used before in sucking from a bottle, we will actually need to “teach” her to suckle first, which could take days. When all is said and done, she may not be able to feed from a bottle (like most healthy babies her size) for days, if not weeks following her birth.*

We certainly see God’s grace in the way He is knitting together our little one. While she may be considered a “big baby” at birth, she will need those extra ounces on her little body to help carry her through the surgery and first few days of life. We can rejoice in the truth of God’s Word, which reads:

“13For you formed my inward parts;
you knitted me together in my mother’s womb.
14I praise you, for I am fearfully and wonderfully made. Wonderful are your works;
my soul knows it very well.
15 My frame was not hidden from you, when I was being made in secret,
intricately woven in the depths of the earth.
16Your eyes saw my unformed substance; in your  book were written, every one of them, the days that were formed for me, when as yet there was none of them.”

Our great God and King is sovereignly forming our little Tikvah with such attention to detail. We await with great anticipation to discover the purposes for which He has made her in such likeness and manner, and until then, we trust that it is for our good and His glory (Romans 8.28-30)! To God be the glory. 🙂

*(Upon her recovery from surgery, Tikvah will be introduced to the bottle first, as it is the most efficient way for her to get the nutrients she needs with the least amount of work. The doctors want her to conserve all of her energy so that her body can focus on healing. Eventually, the goal will be to get her to nurse, but most babies have difficulty making the transition once they have found an “easier” method of feeding. Please join us in praying that God would allow her to learn quickly so that she might re-gain the strength that she needs to fully recover from the surgery.)

I am a sinner, saved by grace striving to increase in the knowledge of my Savior and His precious Word each day. The reader should know that there are a few presuppositions with which I approach this blog: 1) I believe in the biblical gospel, which basically purports that all mankind is born under the curse of sin (due to the sin of Adam and Eve in the garden of Eden). Therefore, man is separated from God and can have no relationship with God because He is perfectly holy, not even able to look upon sin. Unfortunately, God is also perfectly just and must not only separate Himself from sin, but must also punish it. In order to reconcile man to Himself, God, the Father, sent God, the Son, down to earth to live as a man and take our sins upon Himself on the cross. While on the cross, God, the Son, bore the full weight of the wrath of God, the Father, against our sins in order that we who believe in Him might be set free from the curse of our sin. God, the Son, Jesus Christ, died as a propitiation for our sin in order to appease God, the Father's, holy and just character, redeem us from sin, and reconcile those who believe in this gospel to God, the Father. 2) I am primarily writing to those who already believe in this biblical gospel. In other words, this blog is not focused on evangelizing the lost, but edifying believers. 3) I believe that the Christian Bible is the very word of God. Therefore, it is completely inerrant, infallible, sufficient, and authoritative in the life of a believer.
View all posts by Elizabeth →
This entry was posted in Uncategorized and tagged baby, Tikvah, transposition of the great arteries, Update, weight. Bookmark the permalink.